Yacht designers, boat builders and yacht companies from many European countries have shown interest & purchased our IP66 waterproof TV screens for installation on luxury super yachts. Customers have been from Spain, Holland, Italy, Malta, Portugal and so far all the sales made have been by word of mouth & referral throughout the super yacht industry 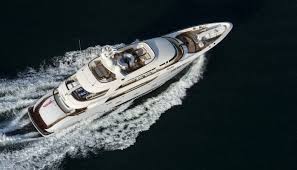 Frank Botman of Botman Sound & Vision in Holland takes up the story. “The reasons why we chose Aqualite waterproof TV display screens for various luxury yacht projects & indeed specifically for the Nassima were a good price to quality ratio and the simple RS232 commands.

Compared to the competition the Aqualite LED display had the least depth of the screen and comes in a solid purpose built housing. The Aqualite screen was right on time delivered on Friday September 14 2012 to our boat fitting yard in Holland and here we are today.”On M/Y Nassima, adjacent to the wheel house there is the captain”s cabin, crew cabins for 7 crew members and a crew mess with a fully independent Galley.

The interior is coherent thought the three decks and matches the outside style of the yacht.

By having the aquarium as a division between the saloon and aft deck, the surrounding environment of the Ocean is brought to life on deck. The Sun Deck is where the Aqualite waterproof TV display Screens is installed & housed in an automatic ceiling lift.

Aqualite Outdoor TV commented. “We have seen this aspect of the waterproof TV market grow rapidly whereby custom marine AV installers have specified our Aqualite marine use TV screens & installed them in various outdoor locations on board luxury sailing boats and super yachts. It’s a real wow factor watching TV outside on a yacht whilst moored up or out at sea.”

A classic, timeless design by Oliver van Meer features an extraordinary stern garage for a car and two motor bikes, as well as a spacious sundeck and a large aquarium on the main deck. The interior is designed by Maja von Dewitz, VDP Studio GmbH and to match the shipyards highest standards, they have been chosen as their production partner.

M/Y Nassima will reach a top speed of 18 knots and a cruising speed of 14 knots, her enormous range at 10 knots will be 8600 nautical miles, making her a true long range yacht. The owner will enjoy a large personal gym as well as a spacious owner”s cabin on the upper deck. The lower deck features a spacious, full beam VIP cabin as well as four twin guest cabins.