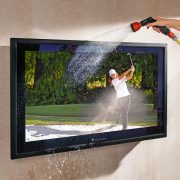 The Aqualite Outdoor range of waterproof LCD & LED TV screens are IP66 rated and certified These TV screens are resistant to dripping and splashing water and also water from heavy seas or projected from powerful water jets.


Water and electricity do not mix! Aqualite Outdoor TV screens are IP66 rated and built to withstand water in all its forms. That includes fog, rain, sleet or snow and can even withstand being drenched by sea water, pressure washers and power hoses

These IP66 LCD & LED TV display screens are also totally dust, pollen and pollution proof making them suitable for use in the most extreme wet and dry conditions.

The IP system is internationally recognised as a method to indicate the degree of protection against the ingress of dust, solid objects and moisture into an enclosure.

The IP rating has been in use in Europe and other countries outside of North America for many years, and has just recently been added to the Canadian Electrical Code (for hazardous locations). They are similar in intent to the NEMA ratings and are widely used on portions of enclosures and components, as well as complete enclosures.

In North America, the common practice is to use NEMA enclosure ratings for both water and dust resistance. These standards were developed and published by the National Electrical Manufacturer’s Association (NEMA) They have been adopted by UL, CSA and other standards bodies in North America. International Standards use the IEC IP ratings instead of the NEMA ratings.

The letters “IP” are followed by two numerals.

1 Protection from solid objects 50 mm in diameter or greater.
A large surface of the body, such as a hand (no protection against deliberate access).

2 Protection from solid objects 12 mm in diameter or greater.
Fingers or similar objects not exceeding 80mm in length.

3 Protection from solid objects 2.5 mm in diameter or greater.
Tools, wires, etc., of diameter or thickness greater than 2.5 mm.

5 Protection from dust
Dust does not enter in sufficient quantity to interfere with satisfactory operation of equipment.

6 Dust tight.
No ingress of dust

The second numeral indicates the degree of protection against the ingress moisture as defined in IEC 60598-1:2003.

2 Protection from dripping water when tilted up to 15º
Vertically dripping water shall have no harmful effect when the enclosure is tilted at an angle up to 15º from its normal position.

3 Protection from spraying water.
Water falling as a spray at any angle up to 60º from the vertical shall have no harmful effect.

4 Protection from splashing water.
Water splashing against the enclosure from any direction shall have no harmful effect.

5 Protection from water jets.
Water projected by a nozzle against enclosure from any direction shall have no harmful effects.

7 Protection from the effects of temporary immersion.
Ingress of water in harmful quantity shall not be possible when the enclosure is immersed in water under defined conditions of pressure and time.

8 Protection from continuous immersion.
The equipment is suitable for continuous submersion in water under conditions which shall be specified by the manufacturer.

Note: Normally, this will mean that the equipment is hermetically sealed. However, with certain types of equipment, it can mean that water can enter but only in such a manner that produces no harmful effects.